Citizenship is nowadays a topic discussed from a local up to an EU level and in all domains of society. The position of the EU citizen has been strengthened significantly during the last decades. The European Union has the most equal and inclusive societies in the world and is the space where citizens’ rights are most protected. At the same time, all member states are facing major challenges, such as the climate change, the identity debate, or the need for media literacy. These and other questions are all interconnected, and bear a relation to the increasing attention for the importance of (in)tangible heritage in connection to citizenship. 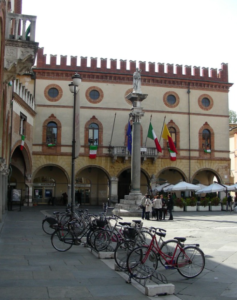 Interdisciplinary curriculum on Entrepreneurship, Heritage & Citizenship
That’s why six leading academic and cultural institutes across Europe have joined forces to develop an interdisciplinary curriculum in the field of (in)tangible heritage, European citizenship and entrepreneurship. We are developing an academic course that brings together the business skills from the regular MBA programs with knowledge from culture, European studies, tangible and intangible heritage studies and citizenship education. The outcomes of this project must lead to new labour market opportunities and the development of new business models for those active in the domain of citizenship and heritage.

This project is unique; until now there is not such a thing as a collaboration between universities in the fields of European Culture, (in)tangible) Heritage and Citizenship.

Transnational student encounters
In practice, this means that we are organizing a series of intensive international summer and winter universities in European Lieux de Mémoire which gave birth to the European history of ideas and the rise of states.

Some examples: the Royal Monastery of Yuste (Spain), the place chosen by Charles V to retire and reflect on the last years of his life; the medieval town of Köszeg (Hungary), which borders five countries in Central Europe; Ravenna (Italy), once the capital of the Western Roman Empire; the University Observatory ‘Alte Sternwarte’ in Göttingen (Germany) (tbc); the Monastery of Cluny (France); and Wereldwaag in Dordrecht, the oldest city of Holland (Netherlands), where the First Assembly of the Free States took place in 1572.

Our students
Applicants for the courses have to meet a set of criteria. Our students come from all over the world and are advanced MA and PhD students, young researchers, professionals, policymakers, social entrepreneurs etc., who will be active in the (in)tangible heritage and/or the broader NGO sector. After successfully completing the course, they are rewarded with ECTS credits. 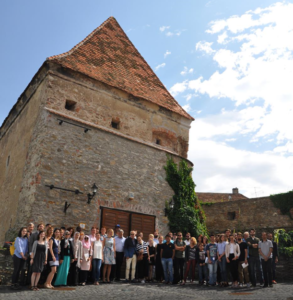 Business, culture, heritage and citizenship
This academic course brings together the business skills from the regular MBA programs with knowledge from culture, European studies, tangible and intangible heritage studies and citizenship education.

These new skills will help those students who are or will be in the future opinion leaders and directors of cultural organisations, be it formal or informal, social enterprises and NGOs of all kind. The (re-) positioning of the organisation, the contextualizing of the mission and supporting open debate and critical thinking will become priorities on their agenda. They learn how to arrange and foster a European dialogue with visitors, opinion makers, policymakers and other stakeholders in their direct environment and beyond. A necessity for sharing European values and broadening intercultural competences and critical thinking of the citizens in their community.

To get an impression of our student encounters, watch this video of last summer’s course in Köszeg.

This European project is a spinoff of the NVAO accredited MBA Culture, Heritage & Citizenship, an initiative of Netherlands Business Academy and Amsterdam Summer University.